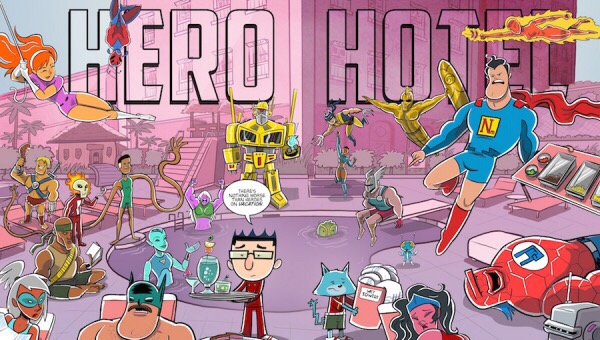 Hero Hotel is a hilarious all-ages comic book series that follows Chet and his cat, Boomer, as they work in a hotel… a hotel for super heroes!  Awesome, right? Wrong. Because there’s nothing worse than a hero on vacation.

They check in. They don’t help out.

SYNOPSIS:
Superheroes – talk about divas. After lifting boulders and buildings all day, they won’t even pick up their own bags… and no one’s got more baggage than supers.

Chet is the kind of kid who always gets in trouble. He helped an old lady cross the street and got arrested for jaywalking. He’s got the worst luck. Chet’s mother sends him and his cat, Boomer, to live with Grandma Zee in her hotel on Hero Beach. And it turns out it’s a lush resort where every superhero, video game hero, action hero, and intergalactic hero goes on vacation. The only problem is that whenever a supervillain threatens to blow up the place, the heroes don’t help… it’s up to the plucky staff to save the day.

Follow Chet and crew as they stop a comet from smashing the hotel and battle symbiotic super suits in an effort to make the hotel presentable for the arrival of snobby eco-hero Rear Admiral Planet!

Hero Hotel is currently available for pre-order through the Fanbase Press website (www.fanbasepress.com), and pre-orders made by Wednesday, October 12, 2016, will receive an original sketch of one of the heroes in the book! The trade paperback will be released for sale on November 21, 2016.